How did the Convention start?

For many years, New South Wales have been running one or more annual conventions to cater for the different aspects of the model railway hobby as they apply in particular, to that State. Les Fordham, an ex-patriot of New South Wales now living in South Australia decided that he would like to know a little more about both the modelling scene and the prototype railways in South Australia and what better way to find out than to hold an annual convention, similar to those running in his former home State.

Who are the organisers?

Les suddenly found that he became, for the lack of a better word, the convener of a model railway convention. He gathered about him, a group of people who liked the concept. They included Ross Hurley, a past editor of The Australian Model Railway Magazine, with an interest in modelling early days of SA; Peter Fehlberg, a printer, with an interest in modelling SAR narrow gauge; Hugh Williams, a Chartered Accountant with an interest in modelling broad gauge SAR; Rob Burford, (now deceased) a retired school principal with an interest in the Commonwealth Railways; Rod Barrington, an Architect with an interest in SA buildings; Bill Lewis, a former Railway employee whose knowledge of the South Australian railways helps our research; John Evans, a Railway Historian and publisher, a former employee of the Railways, the Airlines and of the SA Tourist Commission; Peter Knife, a computer programmer, Railway Historian and Publisher, and modeller of the SAR narrow gauge on the Eyre Peninsula; John Wilson, our electronics wiz and modeller of the prize winning “Wilson” narrow gauge layout; Noel Potter, former railway employee and very active modeller; Gavin Thrum, a master modeller of all things South Australian, English and American; John Gordon, a prolific modeller, trades person, and liaison officer for us with the Medical Centre where our Conventions are held, and finally, and last but not least, Graham Cocks, a well-known modeller amongst N scale followers whose particular interest is promoting modelling of the local prototype in N scale. Not all of the people mentioned above have necessarily been on the committee all of the time.

The committee is not a closed shop and if there is anyone reading this who likes the concept, has a skill that would be of benefit to the hobby and / or to the group, or an idea that he (or she) would like to promote, then why not get in touch with someone on the committee.

There are of course, plenty of modellers and followers of the prototype without whose help we would have floundered or found it much harder to proceed. They include the Australian Model Railway Magazine who supports all such conventions around Australia, local railway historians such as David Parsons and Ron Fluck from the National Railway Museum who provide us with assistance in our research, the late Doug Colquhoun who allowed us to use his extensive photographic library and Inprotrans who now trade as “Refreshing Memories” at 438A Main North Road, Blair Athol SA 5084, who are again (2018) providing a number of detailed plans of South Australian Railway relics. 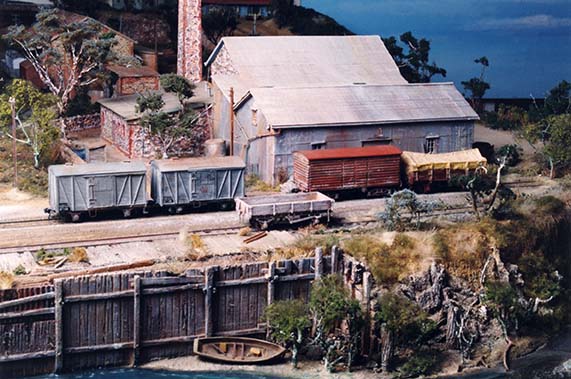 A mill scene on Des McAuliffe’s Wakefield River layout. The mill is based on one at Sedan, but placed in a waterfront setting on the layout. Reasonably heavy weathering is a feature of models made by Des. Photo by Peter Bartrop.

The committee in their wisdom, decided that every presentation should be accompanied by a written paper. Numerous folders are now required to store the printed material which is divided into sections, each section containing topics with common subject material. Our printing guru, editors and presenters ensure that the notes and the paper on which they were printed are of a high quality. The photos including numerous colour photos, plans and papers now form a great reference source of over 4000 pages. Each year, the indexes are updated and searchable indexes showing the topics covered, details of all of the photos and plans in the notes can be found on, or downloaded from this web site.

A potted history of the Convention

The first convention was held at St Augustine’s Church in Unley. The venue was reasonably central, we found a space for all of the trade stands, and the buzz of excitement evident at the convention was enough to ensure that the committee would organise a second convention. The ladies of the Church produced great midday meal, & the Priest in charge at the time produced some interesting bottled wine complete with Railway Labels. About 40 of the 120 participants adjourned to the Cremorne Hotel for an evening meal and etc. The main problem with this venue was sitting on hard wooden pews for a whole day! A decision was made to look for something a little more comfortable, especially in terms of seating.

For the next seven years, the venue used was the Hahndorf Convention Centre. A good venue in terms of comfort in the upstairs area. The lower level used to get a little nippy in some of the years. Midday meals were held downstairs and most of the trade and historical stands were also situated downstairs. Evening meals were also held at the restaurant in the center complex for those who wanted to stay for a chat and for the country and interstate visitors who stayed at the center. The 2003 evening meal was held at the Auchendarrach House at Mt Barker, the tastefully restored mansion at the top end of the main street being part of the Tavern and Cinema complex. The meal and the venue were great and the staff did a terrific job to fit an extra 20 last minute bookings into the room set aside for us.

Most conventions have had some form of modelling display and the upstairs area of the Hahndorf center allowed us plenty of room set out displays as well as set out seats for the 150 delegates, presenters and helpers.

A change is as good as a holiday and in 2004, a Flinders Medical Centre lecture theatre was used. This met our needs perfectly and for the 2005 year, we hired the lecture theatre that holds 300 people to cater for the additional number of attendees. The tiered seating, the very large screen, and the ability to project live close-ups of railway models,

8mm movie film, and power point presentations onto the large screen were certainly a plus for the venue. We have continued to use this venue since 2004.

Numerous trade and other railway-oriented stands are present at each Convention. Various brass and white metal loco kits have been produced and released at the Convention including kits of the 700 and 710 Mikado locos, the 500 class Mountain loco, the T class narrow gauge 4-8-0, the F class 4-6-2 tank loco and the Rx 4-6-0 tender loco. 720, 520 and 500 class body kits have also been offered for sale at the Convention. The latest release (2018) for steam enthusiasts was the ready to run F class 4-6-2 tank loco produced by the “Orient Express” hobby shop. Models of most of the SAR diesel fleet have been produced by more than one manufacturer and for the modern era modeller, there are a large number of ready to run diesels that are of high quality that are currently on the market. Most of these models have been offered for sale by one or more of the trade stands at the Convention.